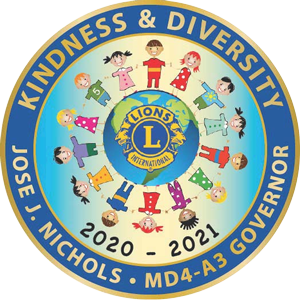 History of District 4-A3

February 27, 1917, the first Lions Club on the west coast was chartered in Oakland. California and the states adjoining it formed what was known as the First District. This district included California, Oregon, Washington and Nevada. Four months later, Lions Clubs International was organized by Melvin Jones. By 1920, there were 9 clubs in the First District, all located in California.

1921, the first District was divided, Oregon and Washington became the 19th district and California, Nevada and Hawaii became the 4th District.

1932, at the District convention, District Four was divided into eight "zones."

1936, Lions International separated the Lions clubs of Hawaii from the Fourth District making them into a separate District with its own District Governor. This District was given the number 30. At this point in time, District 4 included clubs from California and Nevada.

1937 to 1949, Our Sub-District was known as District 4-C one of five Sub-Districts, with one Governor and one Deputy District Governor. The Five Districts were designated 4-A, 4-B, 4-C, 4-D and 4-E. Each District was quite large in size. District 4-C ran from Stockton down to the upper end of San Joaquin Valley and included the coastal area from Paso Robles to Oxnard. The District grew to 93 clubs. In 1937, Fred Smith of the Ventura Downtown  Lions was the first Lion from the tri-counties to be elected Governor. In 1947, Lion Fred was elected Lions International President, the first and only from our District and one of seven from District Four.

1945, The District office was moved to the Granada Building in the business district of Santa Barbara.

1950/1957, Our District was know as 4-G with three regions, Northern, Central and Southern (tri-counties) all with their own Deputy District Governor and two Zone Chairs. In 1953 one additional Zone Chair was added to the southern Region. This District maintained 37 clubs.

1957 4-A3 was establish and was very similar in structure to District 4-G with three regions, Northern, Central & Southern and seven Zones.

1980, MD-4 reached a peak of seventeen Sub- Districts with the addition of 4-C7, but due to declining membership in 1998 Sub-District 4-C2 merged with 4-C7. MD-4 remained at sixteen Sub-Districts until July 5, 2006 when District 4-N (Nevada) separated from MD-4. District Four now exists with four Areas and fifteen Sub-Districts.

1990/1991 4-A3 restructured the district cabinet by establishing a Lieutenant Governor position and dropped the designation of Deputy District Governor and adopted Region Chairmen, This was the year Bill Cady from Vandenberg Village Lions was elected District Governor. At this point in time, 4-A3 maintained 9 Zones with 44 Clubs.